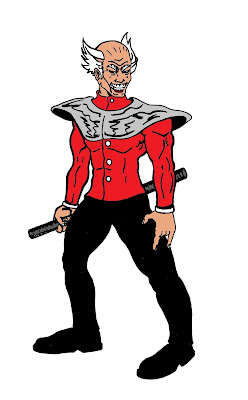 Real Name: Baz BurpMembership: Burp IncRelatives: none knownPlace of Birth: Anarchy-World (alternative dimension)Base of Operations: Burp TowersFirst Appearance: Alliance of Awesomeness #3Background: Baz Burp comes from the dimension known here as Anarchy World - an alternative Earth where there are no governments, due to his ability to effectively destabilise every nation on the planet. This has made him extremely powerful, however he has not used this power to become the controller of the planet, rather he has stayed true to his ideals and kept the planet in a constant state of anarchy. With the invention of a dimensional portal device, Baz Burp has made it his mission to travel to other worlds and spread his anarchic doctrine where ever he can. This has brought him into conflict with the Alliance of Awesomeness on more than one occasion.
Baz Burp has yet to be apprehended, as his dimension hopper has always enabled him to escape when defeated.
Height: 177cm Weight: 75kg Strength: Mr Anarchy possesses the strength of a normal human male who engages in regular exercise.Powers and abilities: Mr Anarchy possesses a dimension hopper which enables him to move between dimensions. He can use this to teleport himself, although only to places within line of sight so that his computer can calculate co-ordinates accurately. He also carries what he terms a 'zappy-stick', which can discharge powerful electro-magnetc blasts.
Mr Anarchy is extremely intelligent, an excellent strategist and able to inspire absolute devotion in the punks who follow him.